No items found.
Product is not available in this quantity.

At Soiefleuri you can customize many of our handmade wedding rings / engagement rings / crosses / necklaces / earrings / bracelets with colored gemstones, colored diamonds and / or optionally with different precious metals to create a unique piece that perfectly matches your unique personality.

Our experienced designers will create a unique piece of jewellery for you and your partner according to your wishes and take you on a mental journey to bring your personal vision to life. We also offer you classic golden wedding rings.

It was introduced in the 6th century before the break between Catholic and Orthodox churches and was used in Byzantine frescoes, arts and crafts. In 1551 during the canonical isolation of the Russian Orthodox Church, Ivan the Terrible, Grand Duke of Moscow, used this cross for the first time on the domes of churches. Since that time it has been displayed on the Russian national coat of arms and military banners. In the second half of the 19th century this cross was promoted by the Russian Empire in the former Grand Duchy of Lithuania as a symbol of its russification policy. 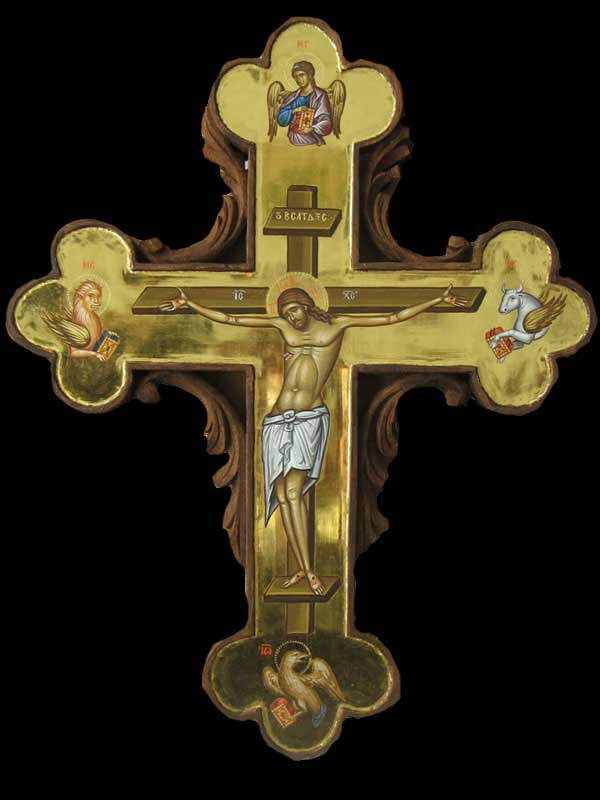 14 September, the Feast of the Discovery and Exaltation of the Cross by St Helena, the mother of Emperor Constantine in Jerusalem in 335

3. Sonntag in den Großen Fasten before Easter, the feast of the veneration of the cross

Hohen Freitag vor Ostern, when the cross is carried out of the chancel into the church and placed there.

In the crucifixion of the Son of God the incomprehensible love of God for humanity becomes visible. Where in the world does a God come so close to mankind that he not only becomes man, but also suffers death for them. But even that is not yet the end of his humiliation. He even descends into the kingdom of death, in which the latter holds the deceased captive. Since it is his law to destroy all life and to bring it into his kingdom, he also had to receive the crucified one, and in and with this - God. But Death could not control him, for He was more powerful than He was. He could not prevent it that this one preached the gospel in his kingdom {1 Peter 3: 19 f.), whose latch broke and opened again the way into paradise for all people. Thus Christ met death with its own weapon: "He trampled death underfoot", as the Easter Troparion sings of this victory.

The three beams of the Russian Cross are sometimes of different lengths in the visual arts: the shortest arm of the cross is the uppermost, slightly longer appears the lowest, the longest is the middle. In heraldry, this method of representation is not always used. Often the uppermost arm of the cross -- presumably for aesthetic reasons -- appears to be just as long as the lowest, which lies at an angle.

The lowest cross arm generally runs from heraldically right above to heraldically left below (or from the perspective of the observer of a coat of arms: from top left to bottom right). This convention follows the symbolism that, seen from Jesus (or a shield-bearer), whose right side characterises the ascent to "heaven", the left side characterises the descent to "hell" (accordingly, the "good thief" crucified with Jesus hung on his right, the second, who did not repent, on his left).

In the heraldic literature this symbolism is not always considered (for example the Großes und allgemeines Wappenbuch (Siebmacher/Gritzner) and the heraldic picture order of the herald under the number 0311 shows the lowest slanting beam of the Russian Cross exactly the other way round: running from heraldically right below to heraldically left above). This position of the lowest cross arm should be explicitly reported if it is used in a coat of arms.

The Russian Cross is the cross of the Russian Orthodox Church. It generally symbolises the transition or choice between "heaven" and "hell". 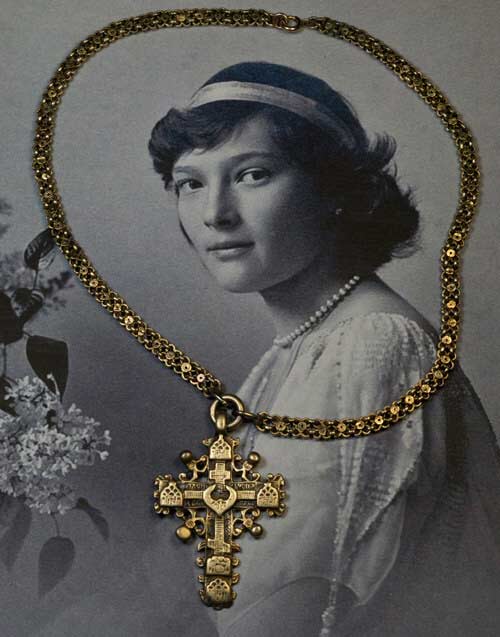 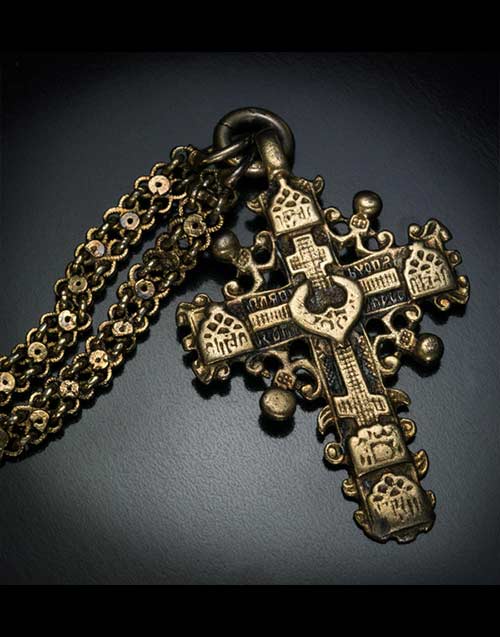 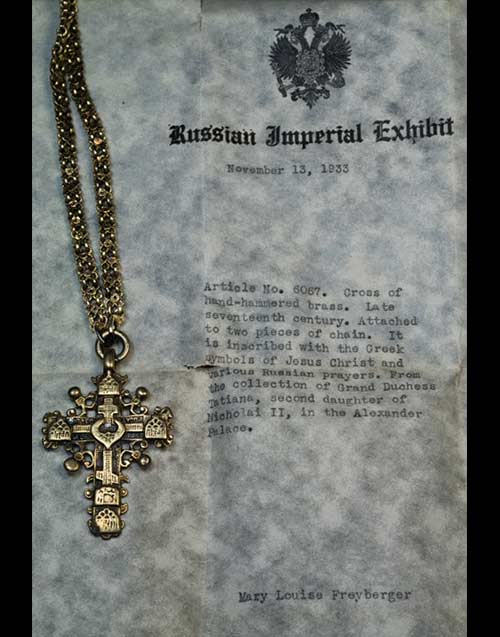 This unique 17th century Russian brass cross necklace, which belonged to Grand Duchess Tatiana (1897-1918), the second daughter of Tsar Nicholas II, was brought to America and sold by Armand Hammer in 1933.

Almost certainly, this cross was given to Tatiana during one of her pilgrimages. It is very likely that the cross initially belonged to a venerated monk or a priest, possibly a canonized saint of the Russian Orthodox Church.

Likely, the original 17th century chain was much longer and was shortened to fit Tatiana’s neck. The chain has a gold clasp (made of Russian rose gold) from the early 1900s. All of these indicate that, apparently, the necklace had been worn by Tatiana.

Armand Hammer (1898-1990), an American entrepreneur, started doing business in the Soviet Russia in 1921 and stayed there until 1930. He met with Lenin in person and was granted a permission to develop the Lena river gold mines in Siberia. In the late 1920s, under the Stalin’s regime, Hammer’s concession in the gold mines was revoked. As a compensation, Stalin allowed him to purchase almost the entire content of the Alexander Palace, the last residence of the Russian Tsar Nicholas II, which mostly consisted of personal items of the Romanovs. Belongings of the Imperial family were sold in America in the 1930s at the Hammer gallery in New York, as well as at the department stores, such as Lord and Taylor.

The cross necklace comes with the original parchment receipt of the Hammer gallery at Lord and Taylor on Fifth avenue in NYC, as well as with its original retail box.

Several years ago, we were fortunate to have another 17th century cross, which belonged to Grand Duchess Anastasia, the youngest daughter of Nicholas II. That cross also had a Hammer gallery provenance.

The rich text element allows you to create and format headings, paragraphs, blockquotes, images, and video all in one place instead of having to add and format them individually. Just double-click and easily create content.

How to customize formatting for each rich text

Headings, paragraphs, blockquotes, figures, images, and figure captions can all be styled after a class is added to the rich text element using the "When inside of" nested selector system.